Seven months since we published our last major program update, “2022 – Year of Service”, right as the pandemic dust started to settle. That update documented the challenges MEC faced at the beginning of the pandemic: School partners not being able to host our members, funding cuts, layoffs, and overall uncertainty. Those years brought with them the biggest challenges MEC has dealt within our nearly ten years of programming.

It was especially tough on our interventionists and staff because together we witnessed the negative impact everything was having on our school systems, teachers, and most of all, our students. Teacher burnout, staffing shortages, online learning, and the chaos of information overload had at times been too much for most adults and often it seemed as though our youth had been overlooked.

Data on the pandemic’s impact on youth is slowly coming in. The Education Trust-Midwest reported that during the 2021-22 school year, 57.2% of all testable Michigan third-grade students did not demonstrate reading proficiency. An excerpt from the report states, “The statewide proficiency rate for third grade ELA on the M-STEP decreased from 45.1% in 2019 to 42.8% in 2021 — a decline of 2.3%. Proficiency rates for third grade Black, Latino, and low-income students that were tested in 2021 were at least 10% below this declined statewide proficiency rate (15.4%, 31.1%, and 27.6% respectively).”

Despite the dire state of things at the beginning of the 2021 school year, we set out to amplify our mission and show up for kids, every day, not just to close learning gaps but to give students the opportunity to have a consistent AmeriCorps member with whom they could develop relationships.

Here is how Allison Rullman, a Lead Reading Corps interventionist let her mentoring spirit shape the future of one of her students.

“Something you need to know about me – I’m a rule follower and I have been my entire life. So it should come as no surprise that I like working with our reading interventions. There are scripts with the exact words of what to say when tutoring our students. Talk about rules!

When we learn about the scripts, we also hear about how important it is to build a relationship with each of our students and to learn from their behaviors. What are they trying to tell us when they act a particular way? It’s with these two ideas in mind that I kind of bent a rule throughout most of this year. Last fall I started tutoring a 3rd grader who was working on the Blending Word pages.

By late October, he was reading the Blending Word pages well enough that we switched to Newscaster Reading and that’s when I discovered my learner liked to rap! At first, I was hesitant to let him rap. After all, in every one of our training videos the student sits quietly and obediently reads the story. But my student was laying down a beat, hitting the table while he rapped the story. He could get kind of loud. And at the same time, he was totally into the story. He was focused on each and every word. So I went with it.

He’d lay down the beat while I read a section three times. I’d try to keep up with his beat. He saw me struggle to match his beat (Did I mention I’m a 58 year old white woman? Rapping isn’t really a part of my world.). We’d laugh at my mistakes and we’d high-fived when I kept up. And then I’d try to keep up to him when we had to read together. Sometimes we were right in sync and sometimes I was terribly off.

The downside to letting my learner rap? Sometimes he’d want to rap the weekly progress monitoring stories (insert frowny face) which meant his score was significantly lower than what I would have wanted for him. I’d practically beg him to read without laying down a beat. But honestly, I think he just hears music when he reads and he almost can’t help himself. So while his scores didn’t reflect his improvement, his confidence grew and he stopped telling me that he wasn’t able to read. He tackled unknown words with his fingers poised to separate the word into smaller parts; most times, if he wasn’t able to figure out what the word was, he at least was pretty close.

Despite the improvements, it came as a little bit of a surprise when I learned yesterday that, based on DRA scores, my student is now at a SECOND grade reading level. Just last fall he was reading at a kindergarten level and there were discussions about retaining him. With the improvements he’s made, those discussions have ceased and he is well on his way to becoming an even better reader and a more successful student!”

In our update and reflection from seven months ago, we pledged that 2022 would be our year of service.

“We are striving to grow our program by increasing our AmeriCorps interventionists, creating even more partnerships with schools and community organizations, and most importantly, providing a brighter future for every student we serve.”

Our interventionists carried us into record-breaking territory. 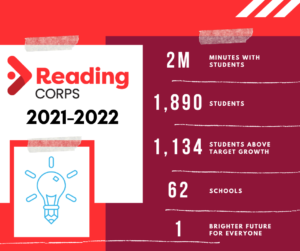 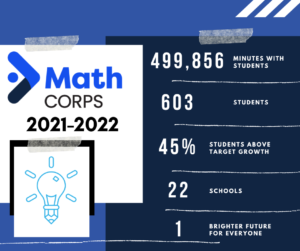 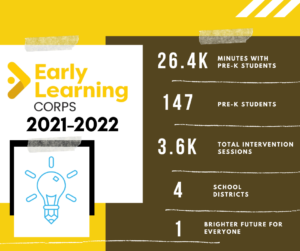 Reading Corps alone delivered 2.1 million minutes of individual tutoring sessions to 1,890 kids. This is the highest number of minutes that the Reading Corps program has delivered since the 2017-18 school year. On top of that 1,134 students (60%) scored above our target growth benchmarks.

MEC Math Corps had its biggest expansion since the program began in 2017. Our members delivered just shy of 500,000 intervention minutes with 603 students, 22 schools in 15 school districts with 27 interventionists. Next year, MEC Math Corps will grow to 29 schools and 16 districts.

Early Learning Corps (previously PreK Reading Corps) has always been our smallest program in size since it was started in 2015. But we are seeing growth here as well. Going into next year, the program will be implemented in three new school districts.

On top of our data and program delivery victories, we have the largest group of returning AmeriCorps members who will continue service for an additional year. We already have 60 confirmed returners as of this publication out of the 106 offers that MEC has made to 22-23 program year applicants. 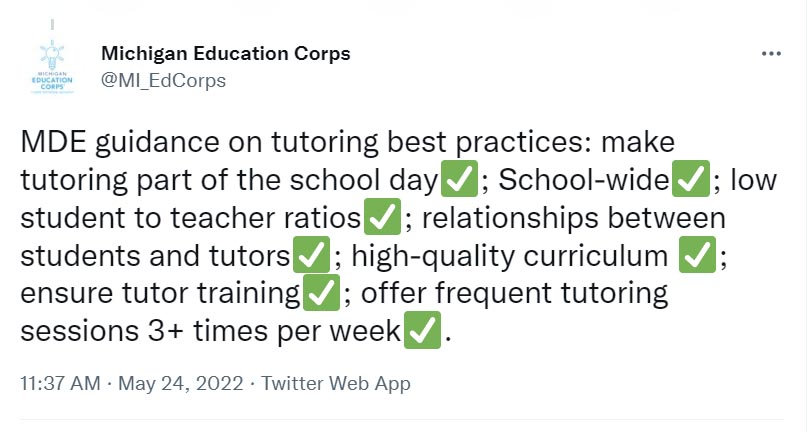 We are excited to announce that the service and dedication from our interventionists and the commitment from our team has been recognized by the state of Michigan. This year, Michigan Education Corps has received the largest allocation from the State of Michigan since 2014.

This allows us to continue strong and serve more schools and kids this year and to grow our program and our staff.

We are humbled and grateful.

The future of MEC and the lives of all our students are looking brighter every day.